Virender along with Purvi and the kids enjoying the fair. Kids are overjoying rides and stall foods. All of them are unaware that Anjali has reached the fair and coming to them with her another worst plan. Virender is watching Purvi enjoying eating cotton candy, while Purvi is eating Virender fix her hairs disturbing her while eating. Purvi smiles at him and then they both go to the turban stall. Purvi asks him to try new stylish turbans. Meanwhile, Virender is assisting Purvi with bangles. 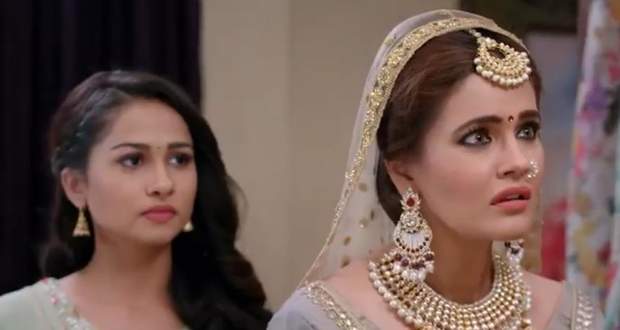 Just then she sees in the mirror and notices Sakshi in it. Purvi looks bemused, Virender asks her what happened. Purvi starts following Sakshi and Virender goes to check the kids. While Purvi chasing Sakshi, she bumped against a woman and just then Sakshi vanished from her eyes. Anjali there goes to the ride operator and distracts him. She suddenly stops the ride and both the kids hang to the cart.

Both the kids get scared and starts shouting for help. While Purvi is getting inquiry of Sakhsi from random people. Manas is hanging in the cart people gathered there. Juhi asks Manas to hold and screams for Hathi and Baba. Purvi is looking for Sakshi all around and then sees that Sudha and Priyu taking Sakshi along with them. They all are describing hiding Sakshi.

Meantime, they listened to the crowd heading to a particular way where Manas is hanging. Purvi and Virender both reached there at the same time and both shocked to see him hanging. Manas just lose her grip and falling down but Virender holds him at the right moment. Everyone appreciates and clap for Virender. Later the fair announced a wrestling match as Virender was the defending champion of the contest.

Purvi tries to stop her but he says that he will compete. The competition starts and Manas says that it seems that Baba won’t manage to win. Virender is competing in the wrestling match and Purvi and the kids are enjoying the match. Anjali cuts the wire of breaks of Viredner’s car. Virender finished up by winning the match. Virender lifts up the trophy and gives it to Purvi. Anjali and Jyoti fail the breaks of Virender’s car. The episode ends catch Molkki written episode update here at Social Telecast.