The latest episode of Anupama starts with Anupama goes to Bapuji and get emotional, she says that only two days are remaining for their divorce. So, we don’t waste these two days sitting and crying it would be better that we made these two days memorable throughout our life. Bapuji asked if you inform Samar about your divorce date. Anupama replies that she got elated seeing his trophy and didn’t want to ruin the moment. Later, Bapuji tells her to cut the cake as it is ready, Anupama says that she is sleeping we don’t disturb her. 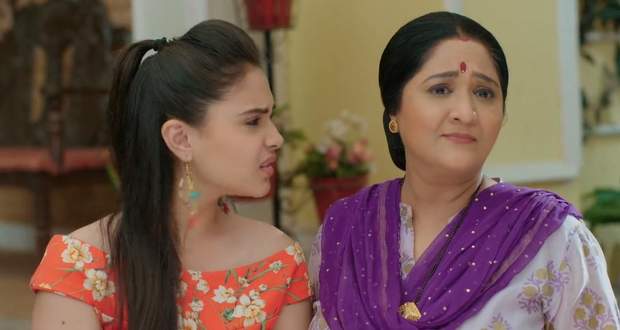 Samar enters Pakhi’s room and shows his trophy to her but he noticed that Pakhi is crying. Samar asks why is she crying, but Pakhi hugs him and burst out of tears. Pakhi further says that their parents are going to divorce within two days. Pakhi pleads to him to stop all this anyhow otherwise, they won’t see their parents together. Just then Toshu calls Samar for congratulation and Samar informs him the same.

Toshu gets shocked hearing that and says that Papa didn’t inform him. Samar feels disgraced as Anupama didn’t inform him. Samar goes to Nandini, she informs him that she came to know from Kavya that Vanraj and Anupama are getting divorced in two days. He says that he is not feeling good, Samar says that even Anupama didn’t tell him about anything. Nandini tries to make him understand that it may have a reason behind her hides this from you.

But Samar is still sad, Nandini suggests better making their two days best of her life instead of getting sad. She then asks him to go to his family spend time with them. Samar then goes to Anupama and says that you always say that we are best friends, so from when best friends starting hiding things from each other. Samar says that there will be no sorrow in these two days we only enjoy and make these two days the happiest days of our life.

Anupama gets emotional and hugs Samar. Pakhi is crying continuously and wishing good for their happiness. Samar comes to her and consoles her. Later everyone gathers and cut the cake. After some happy moments, they all go to their rooms but all are restless of thinking that only one day is left for Anupama and Vanraj divorce. The episode ends, stay tuned for more Anupama written updates.