The upcoming episode of the most popular show Shaurya Aur Anokhi Ki Kahani begins where Shaurya gets shocked Shagun comes ahead of him, he interrogates her by saying what she is doing here. Shagun speaks when it was raining, even that day she bumped with him and she expresses her feelings towards him. She says that she wanted to see that does it matters for him if she comes here or not, Anokhi is also waiting for him so that they can put colors of faces. 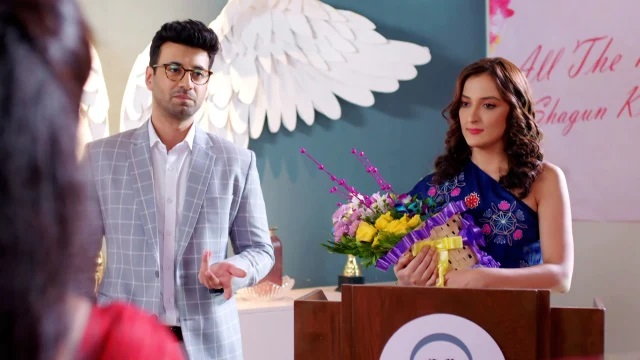 Then Anokhi decides to find him and meanwhile, she sees that he is going outside from the campus without celebrating Holi with her. Then Shagun bumps with Anokhi but they can not see the face, Anokhi gets upset and sit under the shed, and keeps on wondering about him. That what was the issue through which he had to go from here, She consoles herself that maybe he would do some important work. Then Reema comes to her and asks her what happened did she fight with him again.

After that, disagrees with her and Shaurya also shares his feelings with Kanchan, that for the sack of Shagun he could not celebrate Holi with Anokhi. He mentions that he thought first of all he will put color on her but due to circumstances, everything got overturned. But after hearing this Kanchan gets doubts that how she came back to India what is the reason behind this. Another side Devi says to Alok that Shagun has come back to India because she loves Shaurya wholeheartedly.

Then Devi elaborates in front of Alok about her plan, that Shagun has applied for admission in Sabarwal Institute so that she can come close to him more. She gives a duty to Alok that now everything he has to manage about her admission because she convinced Tej as well. So do whatever he can through which she can get admission there, Alok makes her understand that it’s not too easy. But Devi says that Shaurya does such things which will beneficial for students and they like her a lot.

But Kanchan hears this conversation and thinks that she is too clever beyond their thinking, In the next morning Anokhi expresses her anger when she meets Shaurya. He comes to her and asks that where she went yesterday, she replies he did wrong that he left from here. Meanwhile, Tej calls him to the conference room and he went there, Tej reveals that they got one more teacher and calls Shagun There. So do not miss to watch it on Starplus at 07:00 PM.