The latest episode of Pandya Store begins with goons hitting Shiva. They hit on Shiva’s head with a stick. Ravi sees Shiva and begins to scream. She asks Shiva to wake up but he doesn’t. One of the goons asks others to catch the duo and put them in the car. Shiva gets unconscious. Ravi picks up a stick and starts hitting the goons when they were putting Shivan inside the car. However, one goon holds Ravi’s hands and then hit her head with the same stick. Ravi faints. Later, the goons take both Dhara and Ravi to their location while the bike falls down. 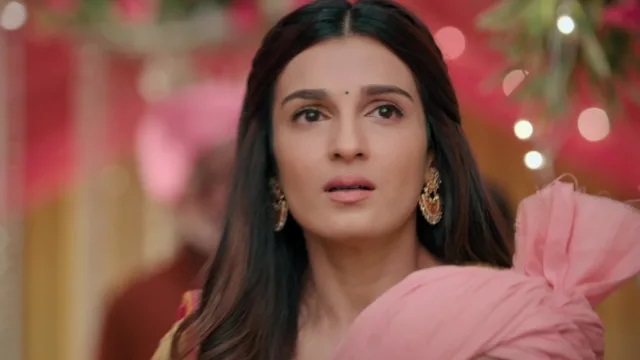 On another side, Dhara and Gautam tie Mannat’s thread in a temple. Gautam asks Dhara if she remembers how she was not happy with this marriage. Dhara nods. She says that now there is no one happier than her. Gautam and Dhara hug each other. Meanwhile, Dev and Rishita are coming on a bike. Rishita asks Dev if he doesn’t think that they should go somewhere afar where there is no one to disturb them. In the next scene, the goons take Shiva and Ravi to their location. Ravi gets worried and thinks about where they are taking them.

The goons snatch Ravi’s phone. Ravi tells them that she had to buy a new one anyhow. Later, they head to Shiva and ask him about his phone. He tells them that it might have fallen somewhere when he was trying to hit them. Ravi begs the goons to leave them as they are not even rich and they will not get anything huge out of this kidnapping. They inform that they have a “Kirana” store. Ravi adds that if they want they can purchase groceries from there. Shiva asks Ravi to keep quiet for a while. Later, both husband-wife begins to fight.

The goons get annoyed and tell them that soon they will pack them in sacks. On another side, Krish gets a call from someone. He tells him that Shiva and Ravi’s bike is fallen on the ground. Krish gets shocked. His friend informs him that someone might have kidnapped Shiva and Ravi. Dhara calls Dev to ask about his whereabouts. Rishita gets pissed and asks Dev why his Bhabhi keeps calling him as they are not kids anymore and fully grownups. Dev tells her that she worries about them. To know the further story of Pandya Store, stay tuned with us.