The recent episode of Aapki Nazro Ne Samjha begins where you will watch that Darsh and Nandini play Dandiya on “Udi Udi Jaaye” song, and both families join them. Nandini supports Darsh in the dance and he gets happy to see her be with him, and she also gives him smile but Mohan is also there and he gets frustrated to see them together, meanwhile, Gunjan sees him when he tries to hide. She wonders why he came there and she goes to him and starts interrogating him. 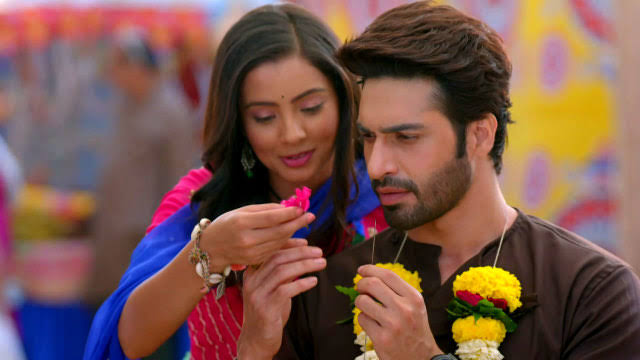 Then Shobit finds her but she is busy with Mohan Patel due to their plan got failed which they have made with Rakla. Extempore Shobit catches them together and she starts justifying herself that he is just her brother. Shobit apologizes to her that he did not tell her about his previous relationship, and he asks her does she has any way through which she can forgive him. She says yes she has and she asks him regarding the diamond ring he says done. Spontaneously he gets Chari’s call and goes from there to talk to her.

After that, Nandini needs to learn how to wear Saree, and hence she needs Gunjan’s help so that she can teach her. Gunjan says that it’s not a big deal at all it’s too simple, so Nandini starts wearing a saree but she stuck in that. Suddenly Gunjan comes there and starts laughing. But Nandini starts crying and Bansuri consoles her that do not worry she will teach her, how to wear Saree. Another side Jeweler got the ring for Gunjan but she wants to purchase something too costly.

Then she says that she wants everything costly and finest, meanwhile, she asks him that why he always busy on a call. On another side Darsh is doing rest in his room and set an alarm meanwhile, Nandini knocks on the window. He asks who is there, Nandini says first just open the window and he looks at her and says what the need that she is coming from the window. She expresses that she is getting queasy regarding the wedding he replies it’s also his first experience with him.

Then he takes Saree from Almira and says it’s pink right, she agrees with him, he says go and wear it, she mentions that she does not know how to wear a saree. on the other hand, Gunjan likes a diamond ring cost 3 lakhs, and Shobit purchase that for her. Darsh also helping Nandini to wear Saree but she is getting shy, suddenly Namrata crossing from there and sees everything. So do not miss to watch it on Starplus At 06:00 PM and for further details stay connected with us.