The upcoming episode of Aapki Nazro Ne Samjha starts with where Darsh’s doctor informs Vipul that he has good news for them, that they are going to get a solution through which Darsh can able to see everything. They get happy after hearing this and Vipul Raval thanks to god that now his elder son also gets back his eyesight, Doctor says that in this era nothing is impossible for science because day-by-day they are progressing. So just Forget all tensions and celebrate this news. 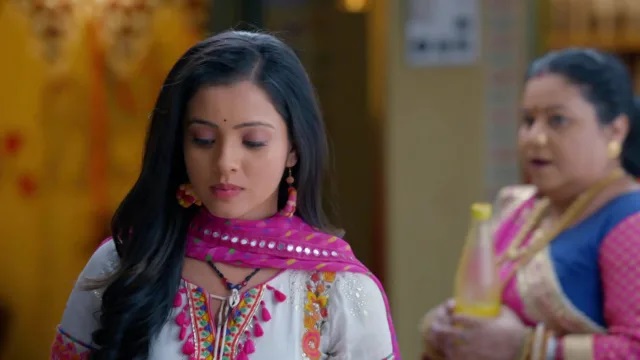 Then you will watch the love angle between Darsh and Nandini they come close to each other when they talk to each other. But here is a twist in the story that one girl gave a bribe to Doctor so that he can tell them this fake news, and this twist will create your curiosity to know about that girl who is behind all this. She says to the doctor that he has to tell a lie to Vipul so that their wedding can be stopped for a while because she does not want to see their wedding.

Now the twist has created a curiosity among all the fans of it that who is she and why she is doing all this, you can watch her glimpse in the recent promo. Through which you can get the idea regarding her but when she bribes him at that time he warns her. That if Rajvi comes to know about it so she will definitely take action against this, so think twice before doing this. Even the doctor is afraid because she can make his doctor’s license cancel.

But despite this, he accepts the money and tells them a lie but another twist is also ready to take a place under which, Charmi gets to know that Shobit has refused her as his bride. So when she will get to know that Shobit is ready to marry Gunjan so what she will do because she loves him madly and when she asked him about their marriage at that time he made her believe that he will definitely agree with his family regarding his marriage, So it is interesting to watch that what will happen next.

In the previous episode of it as we could watch that Mohanlal made a conspiracy against Nandini and Darsh because he registered his name as a groom of Nandini in the registrar’s office. So that he can stop their marriage but when she came to know this she made Darsh understand that she does not even know about it so please believe her. Mohanlal also bribes the officer of the registrar’s office so that he can write their name there, so do not forget to watch it on Star Plus at 06:00 PM.