Anupama leaves along with Vanraj on a motorbike while the complete family is waiting for the mechanic as their car has got punctured. The mechanic informs them that he will be there within half an hour. Just then Baa says that we aren’t going to the picnic, Mamaji surprisingly asks what does she means, Baa says that she is joking this time. Kinjal says that it would be better if we hire a cab as Vanraj and Anupama must have reached the resort. Anupama and Vanraj actually reached to resort, Vanraj park his bike and when he returns he doesn’t find Anupama there. Baa there pretending that she has knee pain. 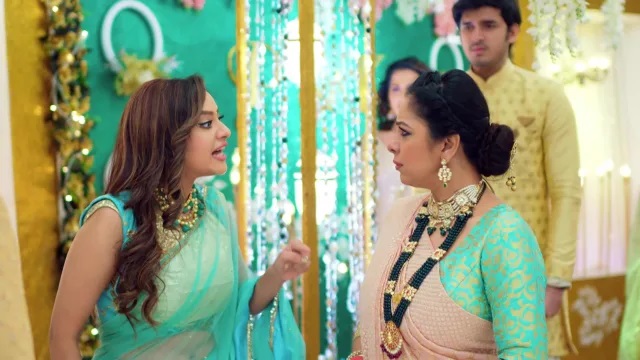 Just looks for Anupama and finds her dancing on the floor, Vanrj smiles seeing her enjoying dancing. At the same time, Vanraj sees that she is about to step on a sharp stone. She saves her by putting his hand on the stone and shouts when she steps on it. Anupama asks what are you doing here. Vanraj reprimands her that you come here even without informing him. Anupama gets sad, Vanraj laughs and says that he was just kidding. Anupama says that she lost her way and later find this temple and feels immense relief and starts dancing.

Anupama is elated and Vanraj says that their life gonna change after 3 days. She says life doesn’t go accordingly always. Anupama says when you come first for alliance at my home I thought that you would reject me. But Vanraj says that don’t ever underestimate yourself as you are quite adorable. Vanraj says that I saw you through the window and you were looking furious. Anupama replies that she wants to study further but his alliance came midway. Anupama says that I fell in love with you when I saw you the first time. She then asks why did you got agreed to me if I was unfit. Vanraj replies that he saw a wife.

Kavya fumes and gets insecure there as Vanraj doesn’t reply to her call. Vanraj then thanks Anupama for serving day night for him and his family for 25 years and that’s too without any expectation. he also thanks to him for their 3 beautiful children who completed them. Vanraj says that you are right there is something between us that kept us together for 25 years. But now, things are going to change as they are gonna get a divorce. Anupama and Vanraj discussing Anupama how they gonna inform about divorce to their family. While Kavya there is planning to inform about the divorce date to Vanraj’s family.